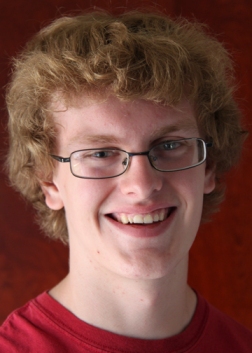 By Franey Miller
“I sell myself in a non-prostitute way,” 15-year-old Charley Nold said. Instead of wanting to sell himself, Nold said he wants to sell products and services through advertising for local businesses.
“I don’t want to advertise big brands like Nike,” said Nold, who will be a junior at DuPont Manual High School in Louisville, Ky. “As an alternative I want to improve local advertising because usually it’s pretty tacky.”
Nold said he has a passion for independent businesses.
“I have a natural desire to help independent businesses and help them get off the ground,” he said.
Nold said he wants to be involved in advertising and public relations. In five years he wants to be “almost over the college hump” at Columbia College in Chicago or Western Kentucky University.
“As long as I get to learn,” Nold said. “I want to go to a college that teaches me, a college that I get something out of.”
As far as public relations goes, he said he loves dealing with people. Nold sees PR and advertising combined into one.
“I would much like to work with advertising car insurance,” Nold said. “It’s easy to sell and people are just stupid if they don’t buy it.”
Nold said that the people who influence him mean a lot to him. One of his greatest influences is his journalism teacher/yearbook adviser Liz Palmer.
“Palmer is a big influence on what I do. I always take my work to her to be critiqued, and it’s much better if your stuff is critiqued by someone you love.”
Nold also said that without Palmer, he wouldn’t even be into designing yearbook pages.  “She introduced me to a whole new world” he said.
Nold said his additional great influence his best friend Wesley, whom he’s known since fourth grade.
“I’m open. I don’t like to hide things from people when I meet them. Wesley’s my best friend, so I tell him everything. He’s definitely up there.”
Other influences in Nold’s life include his parents and grandfather.
“My dad is a writer and my mom was a comp-lit major in college, so I definitely have better writing skills because of them,” Nold said. “But my real family influence is my grandfather. I do what I do to impress my grandfather. I mean, I love what I do, but I also try to impress him as much as I can.”
Nold said that when he is having a bad day, he turns on the television and watches his Kentucky YMCA Leadership Training Conference DVD.
“When I watch it, it makes me laugh. It definitely brightens up my day.”