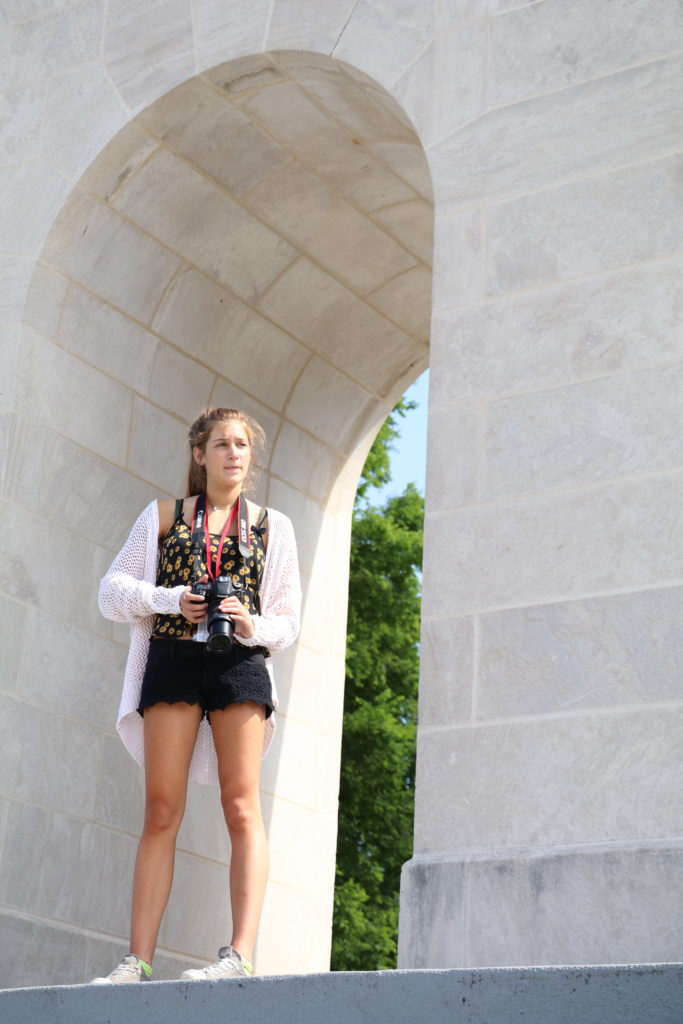 At the beginning of her junior year, Cristina Thorson seriously considered quitting cheerleading because it took up so much of her time. She didn’t have much room for anything else, she said, and she didn’t want her grades and relationships to suffer for it.

“Five minutes before the last day of tryouts ended, I was sitting on my bed in full cheer uniform, staring at my phone and desperately wondering if it was worth it,” Thorson said.

But her coaches and teammates came through for her by sending messages of support and reassurance. Thorson decided to try out, and that year her team won second place in the national competition.

Thorson is a cheerleader, an older sister, a Wisconsin native, a Lexington resident of Norwegian descent and a staffer on her school student publication The Lamplighter. She attends Paul Laurence Dunbar High School in Lexington, where she will be a senior and the co-broadcast-editor of The Lamplighter in the fall.

Thorson said she hopes to write a screenplay and attend Boston University to study communications. She said that she works to accomplish these goals by experiencing as much of life as she can, taking every opportunity that comes her way and working hard to be the best in everything she does, from grades to cheer to journalism.

Thorson and her family moved to Lexington from Middleton, Wisconsin when she was in sixth grade for her father’s new job. At first, she said, she had a hard time adjusting because of the drama and difficulties she faced her first year after the transition.

“I don’t think it was intentional,” Thorson said about the social difficulties she had. “But it wasn’t the best thing for my self-esteem.”

Thorson called her experiences “character building.” Because of her status as the new girl, she was an easy target.

Moving away from home just in time for the start of middle school was hard, Thorson said and signaled the end of her childhood.

“I was very blissfully ignorant, no problems,” she said, describing her life in Wisconsin.

But she adjusted, in large part due to cheerleading and found her niche.

“If you asked me a few years ago if I wanted to move back, I would’ve said yes,” Thorson said. “But now I’m happy that I ended up where I ended up.”

Thorson had been doing gymnastics since she was 6 years old and wanted to continue tumbling in Lexington but didn’t want to continue gymnastics in a new place. She didn’t know what to do until a friend told her about cheerleading, which combines elements of dance and gymnastics.

During her freshman year of high school, Thorson picked up her first pair of cheer shoes, tried out for her school’s cheerleading team and made the team.

Thorson said that she hadn’t known any cheers and couldn’t stunt at the time.

“I just stood there during the cheers,” she said. However, thanks to years of gymnastics, Thorson could tumble with the best of them.

“That’s why I made the team,” Thorson said.

Over the next two years Thorson acquired the knowledge, training and practice to become a truly skilled cheerleader, but it was mostly “trial and error,” said Thorson, who was accepted onto the varsity team in her sophomore year. That year Thorson’s team didn’t do so well.

“It was a ‘building year,’” Thorson said, complete with air quotes. “But it was for the best, I think, because the next year we did a lot better. We never wanted to be that bad again, so we worked harder.”

Through cheer, Thorson has managed to find her place in a community that she has an invaluable role in, both metaphorically and literally. Thorson is a back spotter in cheerleading stunts, meaning she stabilizes and balances the cheerleader that performs jumps and spins at the top of a four-person stunt, known as a flier.

Thorson receives the support and friendship of her cheer community in return. She had never had a nickname until a junior on the JV team started calling her Tina in her freshman year, and the name stuck.

“I love her. I miss her a lot,” Thorson said of the girl, who had since graduated and now attends the University of Louisville. “She visits sometimes.”

While she may not like how much of her time it takes up, she said, the bond of trust she shares with her teammates is priceless.